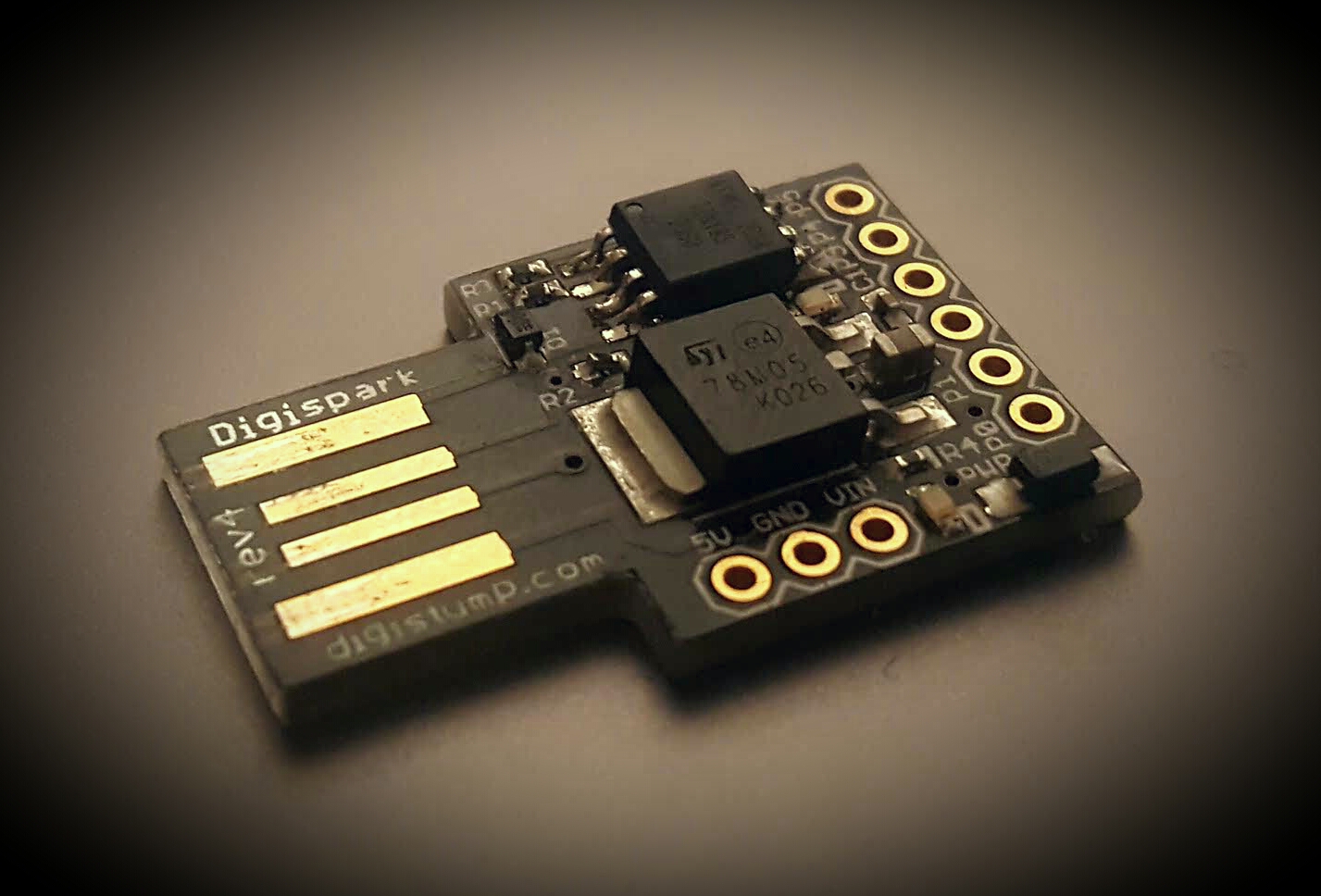 Here is a small guide on how to create a BadUSB – stick with a meterpreter payload to Linux. BadUSB can be a normal USB memory stick with a customized firmware that’ll have the computer to recognize the device as a keyboard. Because of this, the computer thinks that there’s always a user typing on the keyboard, which is a pretty nasty exploit and enablse a lot of possibilities. For example, with physical access to the victims computer you can do following things with BadUSB:

Of course, you could buy a Rubber Ducky from Hak5 , but you’d miss all the fun tinkering with cool things. This guide is made for Digispark from Digistump.
Digispark can be programmed so that when the computer accepts it as a keyboard, it starts to send key presses to computer. Since Digispark has only 8Kb (6Kb of programmable space after bootloader), options are somewhat limited, but should be more than enough for most purposes and it’s also possible to circumvent the space limit.

Since the installation guide is excellent in the digistump.com site, I will not even try to recreate them in detail here. Configure Arduino-IDE by these instructions.
Just make sure you have added following URL to “Additional Boards Manager URLs:” (File -> Preferences): 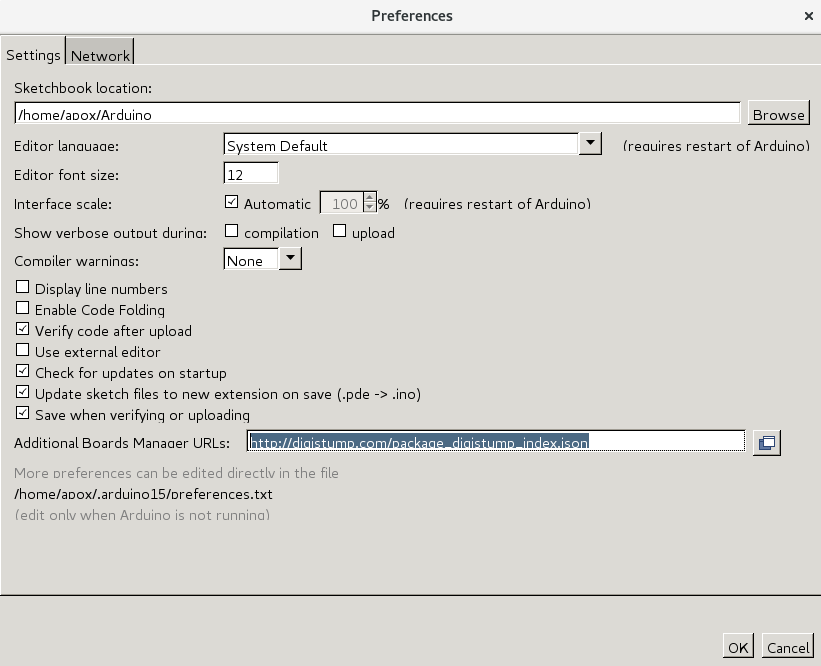 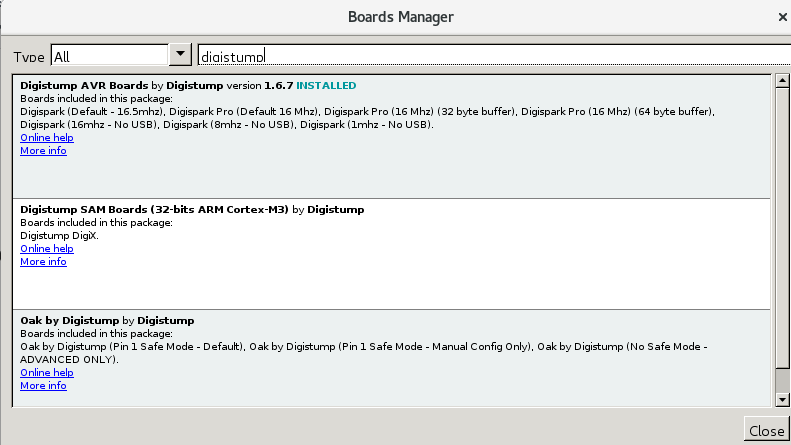 And select “Digispark (Default – 16.5mhz)” as a board.
Arduino-IDE should now be good to go.

Generation of the payload is pretty straightforward. It’s generated with “msfvenom” as follows.

Of course, LPORT and the LHOST should be changed to match your IP-addresses. LHOST should be the Kali box where the metasploit handler is waiting for the connection back from the victim and LPORT is the port you want to use. The output of the msfvenom is directed to file called ‘mShell_880‘. The output of the executable payload is only 155 bytes, so we have plenty of space left.
Since the payload is “typed” to victim, it has to be Base64 encoded, so we can “input” it to victim and generate the executable payload. Basically, what we want to do, is to echo the Base64 string and decode it and direct the output to a file, change the executable bit for the file and run the payload.
Base64 encoding is done as follows:

“mShell_880.b64” – file now holds our payload encoded in Base64. We can use this string in our program that outputs it to victims terminal.

The program is very simple and straightforward. I commented the program below, so it should be very clear what is done. On default, it works only with US – keyboard layout, but it’s possible to remap the keyboard layout from “DigiKeyboard.h” – file. Since this is for PoC only, I don’t include any other layouts in this post. Sorry 😉

Now, it’s possible to check the code for errors from Arduino-IDE by clicking “Sketch => Verify/Compile” (or by pressing CTRL + R on the Arduino-IDE). If no errors found, the program is ready to be uploaded to Digispark by first clicking “Sketch => Upload” (or by pressing CTRL + U on the Arduino IDE) and you should get a following info on the bottom of the IDE window.

Now the Digispark can be inserted to a USB port on the computer. After a while, the update should go through and you should see following info.

The programming of the Digispark is now ready and it now is a ‘BadUSB’.
Note: I had some problems with the uploading. Sometimes it takes a few tries to get a succesful program upload to Digispark, don’t yet know why..

Now multi/handler is setup to catch the meterpreter shell. Payload is “linux/x86/meterpreter/reverse_tcp“, since the generated payload
The whole point of this is guide is to demonstrate how dangerous it is to plug in USB sticks. Keep in mind that normal USB stick firmwares can also be reprogrammed like this and it doesn’t necessary help that they are formatted.
multi/handler can simply be setup from the terminal with following command: 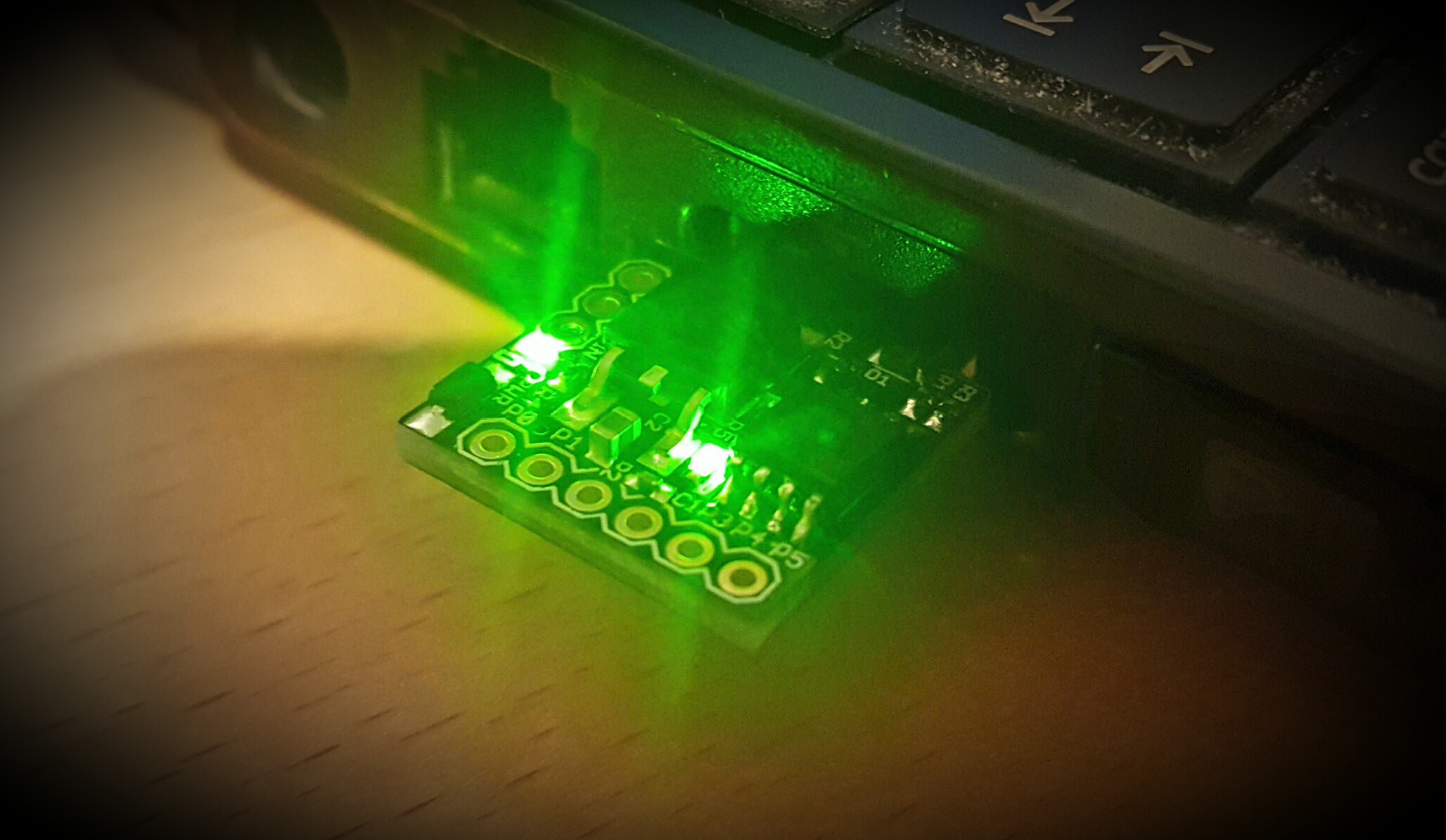 Now we are ready to test the BadUSB we have just created. When the Digispark / BadUSB is now inserted to linux computer, it should open the dashboard/search, open terminal, echo the Base64 encoded payload and decode it to file, change the executable bit for the payload file and run it. When the payload is run, multi/handler gets the shell. Here is a video recorded when the Digispark / BadUSB is inserted in to the linux computer. In the image above, you can see both LEDs from the Digispark are lighted, when the payload on the Digispark is executed.
Top right corner: syslog from ‘victim’, it’s visible when the BadUSB / Digispark is plugged in
Lower right corner: multi/handler from attacking server

As for mitigation, for Windows, there is a program called ‘Beamgun‘ (haven’t tested it yet). Of course as for Windows, Linux, OSX you could always disable USB ports, create scripts that prevent adding new hardware etc., but if you really need USB devices, that would be pretty cumbersome in the long run. And of course…don’t plug untrusted devices to your computer and don’t let anybody plug unknown USB devices to your computer. There is also a physical, small box called ‘USBguard‘ (also not tested in this experiment), that should block these kinds of attacks.

BadUSB stick could also be created with a normal USB drive (e.g. ‘Rubber ducky’ from Hak5) and this shows how bad effects plugging ‘found’ USB stick can have. Payload could also be something more nasty, e.g. wipe the whole drive from the computer.
It’s also possible to create payloads for Windows and OSX. For OSX, you can get a shell using for example following payload after you have launched a shell:

I’ll post example codes for Windows and OSX also when I have time to tinker some more.

This site uses cookies. By continuing to browse the site, you are agreeing to our use of cookies.

We may request cookies to be set on your device. We use cookies to let us know when you visit our websites, how you interact with us, to enrich your user experience, and to customize your relationship with our website.

Click on the different category headings to find out more. You can also change some of your preferences. Note that blocking some types of cookies may impact your experience on our websites and the services we are able to offer.

These cookies are strictly necessary to provide you with services available through our website and to use some of its features.

Because these cookies are strictly necessary to deliver the website, refuseing them will have impact how our site functions. You always can block or delete cookies by changing your browser settings and force blocking all cookies on this website. But this will always prompt you to accept/refuse cookies when revisiting our site.

We fully respect if you want to refuse cookies but to avoid asking you again and again kindly allow us to store a cookie for that. You are free to opt out any time or opt in for other cookies to get a better experience. If you refuse cookies we will remove all set cookies in our domain.

We provide you with a list of stored cookies on your computer in our domain so you can check what we stored. Due to security reasons we are not able to show or modify cookies from other domains. You can check these in your browser security settings.

We also use different external services like Google Webfonts, Google Maps, and external Video providers. Since these providers may collect personal data like your IP address we allow you to block them here. Please be aware that this might heavily reduce the functionality and appearance of our site. Changes will take effect once you reload the page.